Legacies of slavery, racism, and empire in the history of medicine

On November 12, 2021, the University of Chicago Center in Paris and the Université Toulouse – Jean Jaurès organise an online symposium on slavery, racism, and empire in the history of medicine.

For most of the 20th century, historical studies on race and medicine were long considered marginal compared to more traditional work on slave societies or colonial history. However, they have recently experienced a revival, particularly since the 2000s, and a range of books and articles have been published in English and in French. Some shed light on the relationships between the development of slavery in the United States and the emergence of new medical practices and theories used largely by white doctors to treat black bodies on plantations, others focus on experiments conducted on the bodies of the enslaved by white doctors or the use of alternative medical practices and self-administered care by the enslaved and their descendants, during and after slavery, often qualified as illegitimate by the doctors whose science was firmly rooted in the Euro-centric tradition. Some recent works have also dealt with race, medicine and imperial history, both in British and French colonies. This international symposium in English will gather scholars from France and from the United States who are currently working on French imperial history, race and medicine or on the history of slavery in the US and the medical treatment of African-American patients in the 19th and 20th centuries. This one-day event will therefore propose a unique opportunity for French and American academic audiences and students to discuss new contributions in French history, American history and the history of medicine.

More information and registration through the University of Chicago Center in Paris website. 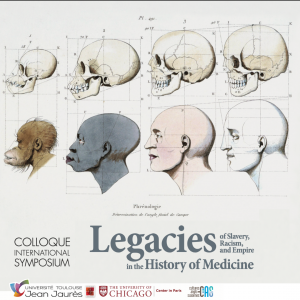