The health policy of Els Borst-Eilers. A balancing act between science and politics by Nele Beyens

What happens when a medical scientist takes political office?
In August 1994, Els Borst-Eilers took office as the new Minister of Health in the Netherlands. Although she had been a party member of the liberal-progressive party D66 since its early days, she had never before fulfilled a political position. Instead, she could present a long career in healthcare, not as a practitioner, but as a scientist and manager in the healthcare sector. In the years before taking office, Borst served as a professor in research methodology and as the vice chairwomen of the Health Council of the Netherlands, an independent scientific advisory body whose legal task it is to advise the Dutch ministers and Parliament in the field of public health and healthcare research. As such, Borst functioned as an important figurehead of Dutch medical science and health research.

Els Borst was used to reasoning with the logic of medical and scientific practice, and didn’t lose that habit overnight by becoming Minister of Health. On the contrary, it appears that she had some trouble adapting to a more political way of thinking and decision making. In this lecture I will examine how Borsts scientific disposition materialized in her work as Minister of Health, as it seems to have both helped and hindered her. In the end, she succeeded in realizing an impressive amount of legislation in response to the challenges of Dutch health care. 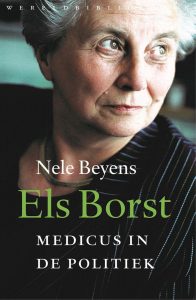